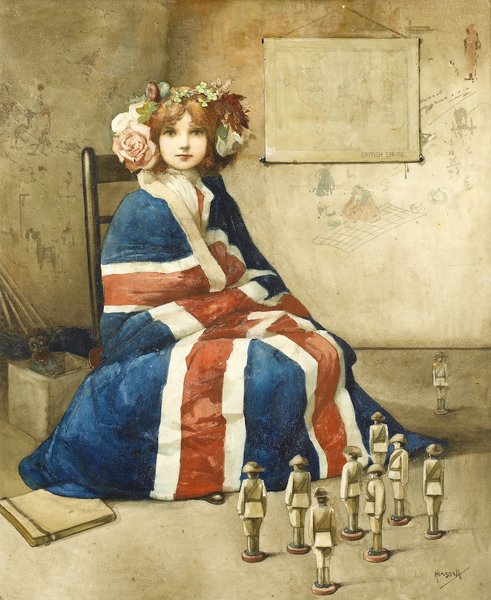 This striking image probably dates to the period of the Boer War of 1899–1902, when the Orange Free State and the South African Republic were absorbed into the British Empire. Hassall’s approach to the subject reflects public opinion of the period, which was much at ease with the aggressive foreign policy of the ruling Conservative government, who were duly re- elected in 1900. Hassall was fascinated by the military, being the son of a naval officer and having attempted on two occasions to join the Royal

Military Academy in Sandhurst. The sketches of Japanese figures on the walls behind possibly refer to the expansionist ambition of Japan in this period. Hassall’s distinctive two-dimensional decorative style was much indebted to Japanese art.

IN 1900  the Population of Britain was about 40 million. The Labour Party was  founded.

On 22 January 1901 Queen Victoria died and Edward VII ascended to the throne.

The Exposition Universelle in Paris helpED popularize Art the Nouveau style. Alphonse Mucha decorated the Bosnia and Herzegovina Pavilion and collaborates on the Austria-Hungary one.

The Wallace Collection in London opened to the public.

Claude Monet stayed in London and began his Houses of Parliament series of paintings.

Mary Cassatt - Jules Being Dried by His Mother

Holman Hunt – The Light of the World (replica))