Charles Robert Ashbee was born in London, the son of a prosperous city merchant. Educated at Wellington College and King's College, Cambridge, he was articled to G. F. Bodley. While working in Bodley's office Ashbee lived at Toynbee Hall, the pioneer University Settlement in Whitechapel, where he initiated classes in art and craft that became the nucleus of the School of Handicraft (1887) and the Guild of Handicraft (1888). The Guild is now chiefly known for the metalwork and jewellery designed by Ashbee himself, and for the furniture made for the Grand Duke of Hesse in collaboration with the designer M. H. Baillie Scott in the workshops at Essex House in the Mile End Road.

In 1902 Ashbee removed the entire Guild to Chipping Campden in the Cotswolds. For a while the Guild's affairs prospered, but from 1905 the receipts from the craftwork fell off disastrously and by 1907 the company was forced into voluntary liquidation. Ashbee continued throughout this period with his architectural practice, which brought in a number of decorative commissions to the Guild. He designed two groups of houses in Cheyne Walk, Chelsea, and a number of squat, square houses in the country, some of which feature in A Book of Cottages and Little Houses. 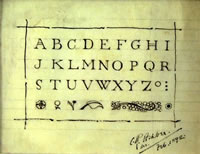