Sims painted portraits, landscapes, and decorative paintings. He was one of that group of artists who continued to treat symbolic and romantic themes after the First World War.

He received his art education in in the South Kensington and , and in in the ateliers of Julian and Baschet. His continental training probably accounts for his fluent handling of paint, and his confident treatment of space and atmosphere. These qualities rapidly gained him critical and academic success. A picture was bought for the gallery of modern art, the Luxemburg, in 1897 and for the public gallery in in 1902. He held a highly successful one man show at the Leicester Gallery in 1906, and 'The Fountain' was bought for the Chantrey Bequest in 1908. Academic honours followed. He was elected Associate of the in 1908, Associate of the Royal Watercolour Society in 1911, Member of the Royal Watercolour Society in 1914 and Royal Academician in 1915. He became keeper of the Royal Academy Schools in 1920.

The First World War proved to be a traumatic experience for Sims, from which he never recovered. His eldest son was killed and he was unbalanced by what he witnessed in where he was sent as a war artist in 1918. His subsequent paintings often show signs of the mental disturbance which led him to resign his post at the Royal Academy Schools in 1926. In 1928, Sims committed suicide. A study of his life by one of his sons appeared in 1934, and a selection of his work appeared in the Last Romantics exhibition (Barbican Art Gallery, London 1989). 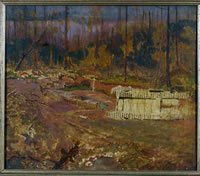 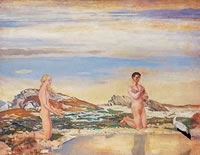 Charles Sims
The Stork, circa 1915