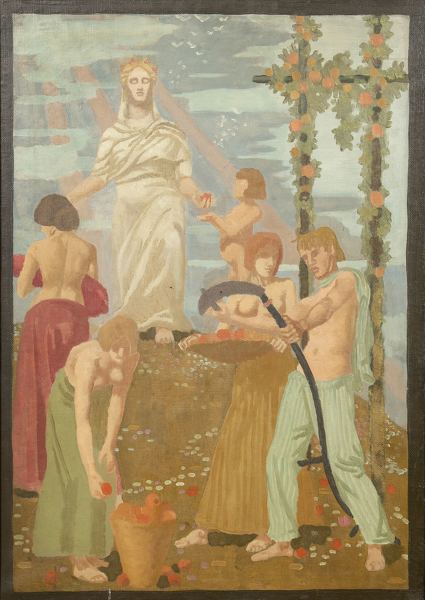 
Signed and dated
Oil on canvas

Provenance: Given by Colin Gill to the artist Stanley Lewis during the 1930's; Private collection

Colin Gill attended the Slade at a vibrant time; dressed in ‘dramatic, bohemian clothes’ he frequented the Café Royal, dining in the ground-floor room with his ‘exalted artist friends’ including Augustus John. While never formally associated with the self-styled Slade ‘Neo-Primitives’, Gill shared a close friendship with Mark Gertler and William Roberts. These artists, nourished by the cumulative effect of a series of important exhibitions of early Italian painting held in London before the war and Roger Fry’s Post- Impressionist exhibitions in 1910 and 1912, worked in varying degrees towards a synthesis of contemporary French and early Renaissance painting in the search for a new visual language through which modern art could be addressed.

'Flora' is his only known painting from this period, and shows that while he was obliquely related to this process, by resisting the more modernist experiments of his peers, his paintings came to be deemed as ‘archaic in a way the others are not’.

This was one of the colour studies that Gill submitted for his winning entry for the Scholarship to the British School at Rome which he won in 1913. His scholarship was interrupted by the First World War: he served in France 1915-18 and was appointed an Official War Artist. He returned to the British School in 1919, where he produced his masterpiece, Allegro.