Amy Gladys Donovan was the daughter of an officer in the Indian army, and spent much of her early life in India. Upon moving to England in 1911, her artistic ambitions were met with some resistance from her family, but she eventually enrolled at the Slade School of Fine Art.

Between 1936 and 1938 she took part in numerous exhibitions, including at the RBA, the NEAC and the Royal Cambrian Academy.

Struggling with familial disapproval, however, she moved away from the experimental Impressionist works that garnered her original success and spent her later years taking commissions for portraits. 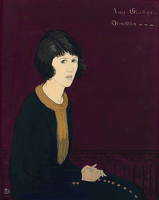