Painter, especially of landscapes in watercolour, and teacher, who in 1912 married Enid Ledward, sister of Gilbert Ledward the sculptor. He was born in Halifax, Yorkshire, and studied at Leeds and Royal Colleges of Art, latterly under Gerald Moira, winning the Prix de Rome which took him to Italy. he taught first at Beckenham School of Art and after World War I service in the Army returned there. He was also principal at Chelsea, the Central School of Arts and Crafts, 1930-5, then the Royal College of Art, 1935-48, where he was influential, making shrewd appointments such as Henry Moore and Gilbert Spencer. Exhibited at RA, RWS, NEAC, Redfern Gallery, Fine Art Society and had a series of solo shows at St George's Gallery in the 1920s. His work is in many British and overseas galleries. Jowett's watercolour Boats, illustrated in Percy V Bradshaw's book Watercolour, is typical of the artist's loose and fresh style. Lived in London. Michael Parkin Gallery had a show of his work in 1955. 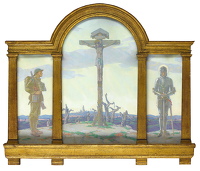