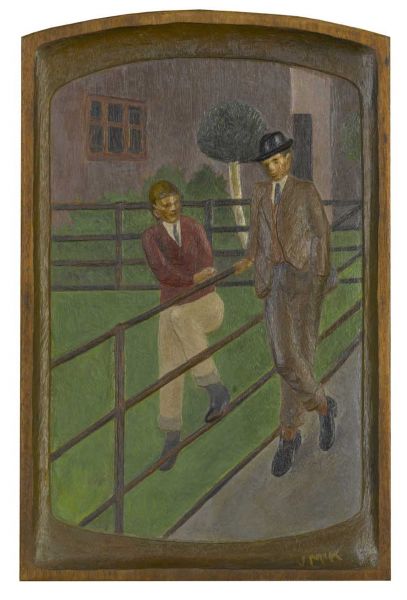 ‘I keep on drawing and re-drawing until what I’ve produced simply asks to be carved’ (John McKenzie, Abroath Herald, 1 February 1963).
The remarkable work of John McKenzie has only recently come back to light. Despite exhibiting his slates at the Royal Scottish Academy Summer Exhibition, the Royal Glasgow Institute of Fine Arts, and in two solo exhibitions at the Public Library in his home town of Abroath, he had no interest in the commercial aspects of his work and sold no more than a handful of sculptures during his lifetime. Using  initially oak panels, in the 30's, and later Welsh slate, in the 1940's  and working with engraver’s tools, he produced three to four reliefs a year, which amounted to less than a hundred in his entire career.

By day a charge-hand messman on HMS Condor (and later a railwayman), the reclusive McKenzie indulged his passion for carving by night and at the weekends. Producing in equal number scenes of contemporary life and scenes of antiquity, it is especially in the former that he found his most distinctive voice. His images  are rich in symbolism, which though often obscure is always engaging.