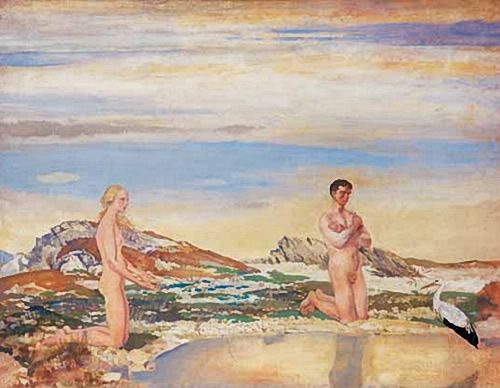 
Signed, with artist's label on reverse

'Art may claim to be religious that,without conforming to any one dogma, seeks to express those needs of wonder and worship common to mankind. The beauty of holiness is the property of no one creed, each creed in its ritual celebrating those ideas of innocence, discipline and sacrifice shared by men of every faith, even by the true sceptic, the earnest enquirer into the mystery of our ultimate being' (Charles Sims, defending The Seven Sacraments of the Holy Church, quoted in Sims, Charles Sims: Picture Making:Technique and Inspiration,  London 1934,p.21).
Between 1915 and 1917 Sims produced a remarkable series of paintings in the Italian Primitive manner,The Seven Sacramentsof the Holy Church.The first of these was titled The Baptism, a painting of identical size and composition to The Stork, except that the figures are clothed rather than naked, and address themselves to a saint baptising a baby, rather than to a stork. It is hard to say whether or not The Stork preceded The Baptism, or for what purpose Sims painted The Stork, which did not form part of The Seven Sacraments series. The landscape in the background is characteristic of the exceptional lyrical landscapes that Sims produced prior to and during the period of the First World War (see cat.15).