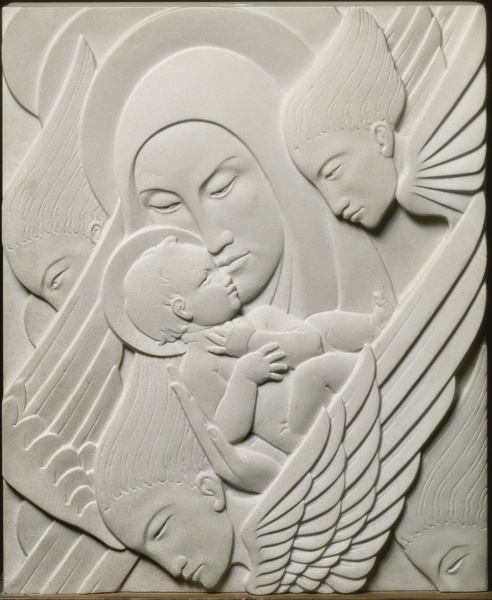 Madonna of the Adoring Angels was the second of Daisy Borneï¿½s artworks exhibited at the Royal Academy, where she debuted in 1932. The 1939 piece was her first in Palomino marble and first religious subject (a theme in which she would specialise). Together with Joyce Bidder, with whom she shared a studio for fifty years, Borneï¿½s sculpture interlaced Neo- Classical and Modern elements.

The surface teems with life, simultaneously languid and tense. Soft curves of chins and wings, and the radiating thin relief of the Madonnaï¿½s halo, contrast with the precision of hair, eyes and quills. The infant Christï¿½s chubby body, his hands suggestive of tender play, are bordered by the stylised, slender fingers of his mother, the maternal hand an echo of the angelsï¿½ wings. Borne expresses adoration in the steady gaze of the angel on the upper right of the relief, its lips turned slightly upward in a subtle gesture of love for the Son of God.

Borneï¿½s creative approach to the theme of the Madonna and Child combines the streamlined rush of jazz-age winged putti with the solemn stillness of the Virginï¿½s monumental presence, even as her head covering appears to merge with a stiff angel wing and flowing angelic hair. She had lived in America and her work bears relationship with transatlantic Christian Moderne sculptors such as Lee Lawrie. Borneï¿½s composition, both contained within and exceeding its frame, offers new vitality to a classic subject and medium.